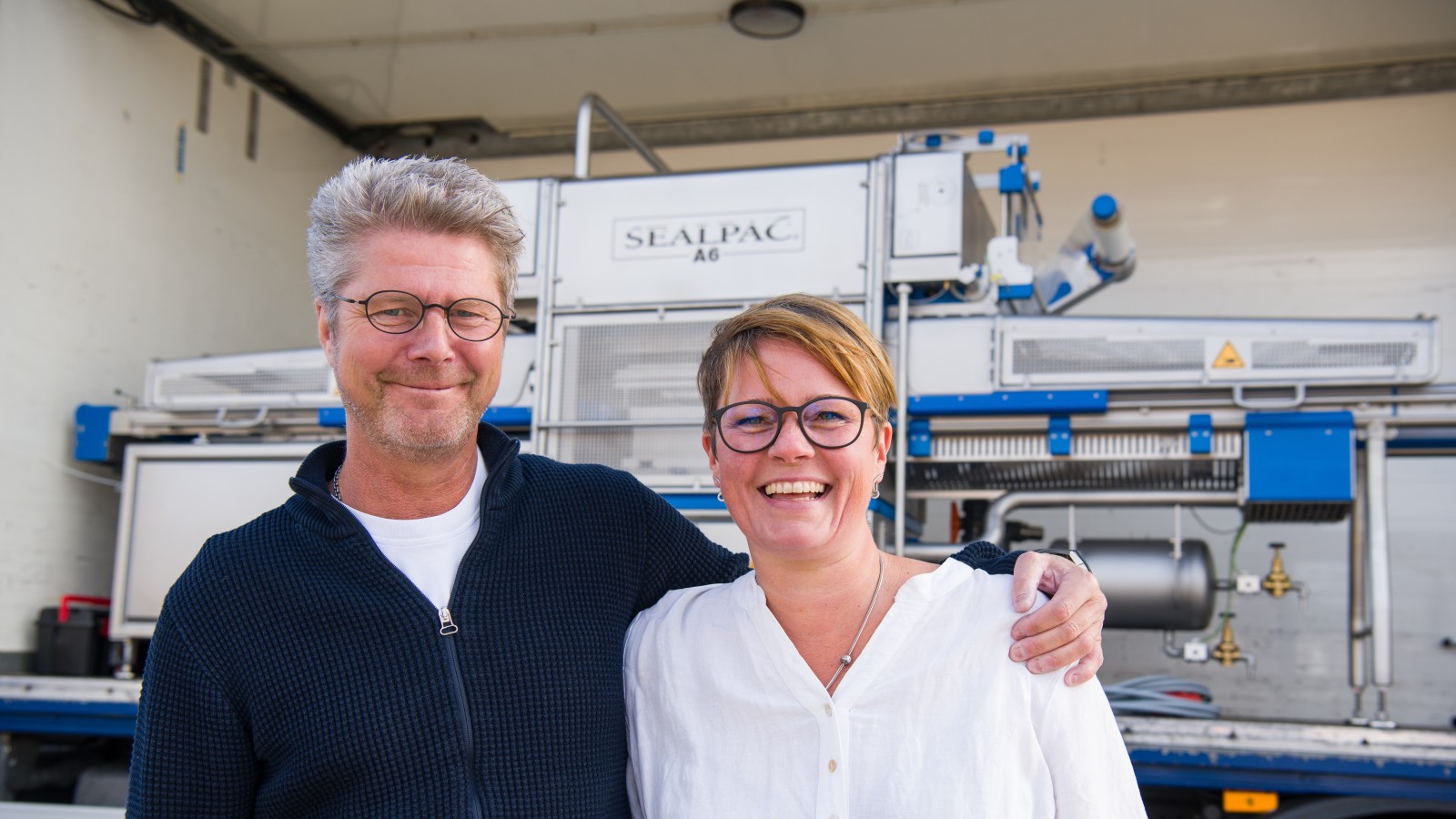 Butcher Norlyk had a new traysealer installed for top sealing of trays just a few days before the corona shutdown hit Denmark in March. Today, the food company in Grindsted is happy that Nemco managed to launch the new traysealer from Sealpac before the corona crisis really broke out. Butcher Norlyk has had a turnover increase of 20-25 percent since March. And it is far from certain that Slagter Norlyk would have been able to deliver all the requested products on time if Nemco had not helped the company with the delivery and installation of the new traysealer.

- We have been busy during the corona pandemic. We have clearly noticed that people have been at home and that they have bought several of our products in the supermarkets. So we still have the 41 employees that we also had before the crisis broke out, says Ulla Holst Møller, who owns Slagter Norlyk together with her husband Lars Møller.

In early 2020, Butcher Norlyk tumbled with major problems with their old top-sealing machine. The machine was unstable and there were many production stops.

- The lack of stability was problematic because we only had one packing machine. We entered into a dialogue with René Dammand from Nemco. He recommended a Sealpac traysealer and we got him to ask Sealpac how fast they could deliver such a machine. Sealpac was able to do this in a very short time, and Nemco installed the machine efficiently and competently, and so quickly that our customers did not discover it. Not a single package of minced meat was not delivered on time, says Lars Møller.

Nemco was at Slagter Norlyk for the first 14 days with the new traysealer and helped implementing the machine, and assisted with new packaging solutions.

- Throughout, we have received good and competent service from Nemco. They know exactly what their machines can do and they have helped us when we needed it. Today, we handle 52 trays per minute, contrary to the 15 trays per minute on the old machine, says Lars Møller.

In addition, according to Ulla Holst Møller, the Sealpac tray sealer is stable. Thus, Slagter Norlyk now avoids situations where three men in the production cannot continue working, at the same time as there is a driver waiting in vain for finished products.

Butcher Norlyk started in 1959 as a traditional butcher shop in Sønder Omme. Since then, Slagter Norlyk has developed into a modern food company, whose products are primarily sold by the supermarket chains Lidl, Netto, Aldi and ABC Lavpris. The latter uses Slagter Norlyk as a butcher for all of the chain's 14 stores. For the other chains, Slagter Norlyk primarily supplies spot goods, but the Grindsted company has just entered into an agreement with Aldi for a fixed supply of turkey tenderloin and turkey cordon bleu. And for Lidl, Slagter Norlyk is developing a gourmet spiced sausage in collaboration with Michelin chef Wassim Hallal.

- We deliver old-fashioned butcher's quality. It is Lars and I, who develop the products. We are involved in all stages of production. We even go out and taste. We step in if a helping hand is needed somewhere in the company. Machine-wise, Slagter Norlyk can do the same as Skare and Danish Crown, but on a much smaller scale. This also means that we accept relatively small orders, says Ulla Holst Møller.

95 percent of the meat in Slagter Norlyk's products is Danish. The company is organically certified according to the ISO 22.000 standard and is aiming to become IFS certified this year.

- We are very aware of what our customers require. If a customer gets a new need, then we are good at reorganizing production immediately. This is our hallmark, says Lars Møller

Join us at NEMCO SLICING & PACKAGING DAYS 2023 to discover the latest technology in meat, fish and poultry slicing from Grasselli and Borncut.

Nemco exhibits at FoodTech in Herning from 1-3 November 2022

Come and join the Food & Drink Trade Fair in Tampere - Meet us at booth C 641 where we will show solutions from Vemag, Bettcher, Henneken and scansteel

Read more
See you in October?

Are you coming to ScanPack in October?

Nemco will be a partner and exhibitor when ScanPack opens the doors for this year's event in Göteborg on 4 October 2022.

If you are planning to attend IFFA 2022, you can book your ticket with Nemco. You can meet all our specialists every day.

Nemco will be there, when this years' Anuga FoodTec open its doors from the 26th to the 29th of April 2022 in Cologne, Germany.

Sandra Gabriel has just started as Product Manager at Nemco, which is a Nordic supplier of equipment for the food industry made by leading international manufacturers.

We thank Himmerlandskød for the trust and look forward to unveiling the future of user-friendly and environmentally friendly packaging solutions, which are developed in collaboration with Vemag and Sealpac.

We are currently looking for a colleague for Business Intelligence in the service department, who services Nemco's customers in the food industry in the Nordic region with spare parts, maintenance and technical service.

Service Technicians for Denmark and the Nordic countries

If you want to be part of the Nordic region's strongest service team, which consists of specially trained technicians in the food industry, we have the job for you!

Bettcher ACS breading machine - test it in your own production

You now have the opportunity to test a Bettcher ACS in your own production. It only requires you to make an appointment.

Climate-friendly packaging is a sought-after product and a new tray with 60% less plastic from Sealpac meets a large consumer demand.

In recent years, Nemco has focused on development within the plant protein, confectionery and baker segments, which is why the new partnership with Seydelmann is an important addition to the selection of industrial cutters.

You will be able to experience Vemag Robby in our showroom in Viby J. from the 8th to the 19th of March.

Nemco can now present yet a newly appointed employee: Lars-Göran Malmberg has joined Nemco AB as a new project manager.